The neighbourhoods of St Barth

St Barths is a holiday destination par excellence, and also a special place to live. Fancy moving to move to this island paradise with its white sandy beaches? Here’s an informal guide to help you find your new home. From the capital Gustavia to Grand Fonds, there are plenty of charming spots on this French island bathed by the Caribbean Sea. Gustavia, the island’s capital, and main town is located in the west. This charming home port, a meeting place for the most stunning yachts during the high season, offers its visitors a picturesque setting: the houses are topped with red roofs that blend in perfectly with the landscape. Life here is very lively with a host of cafes and restaurants offering a high quality culinary experience.

Commercial activity revolves around luxury boutiques, a shopping paradise for tourists. Under the Caribbean sun, the mood is always fine: just head to the marina to feel the pulse!

The capital of St Barts has a beautiful historical heritage, including Fort Gustav, Fort Karl, the Swedish Bell Tower, and the Wall House Territorial Museum. Shell Beach is located a stone’s throw from the centre of the capital and is covered in magnificent shells, a perfect spot for sunset!

Gustavia has the highest building density on the island, with a building right of 100% of the land area. 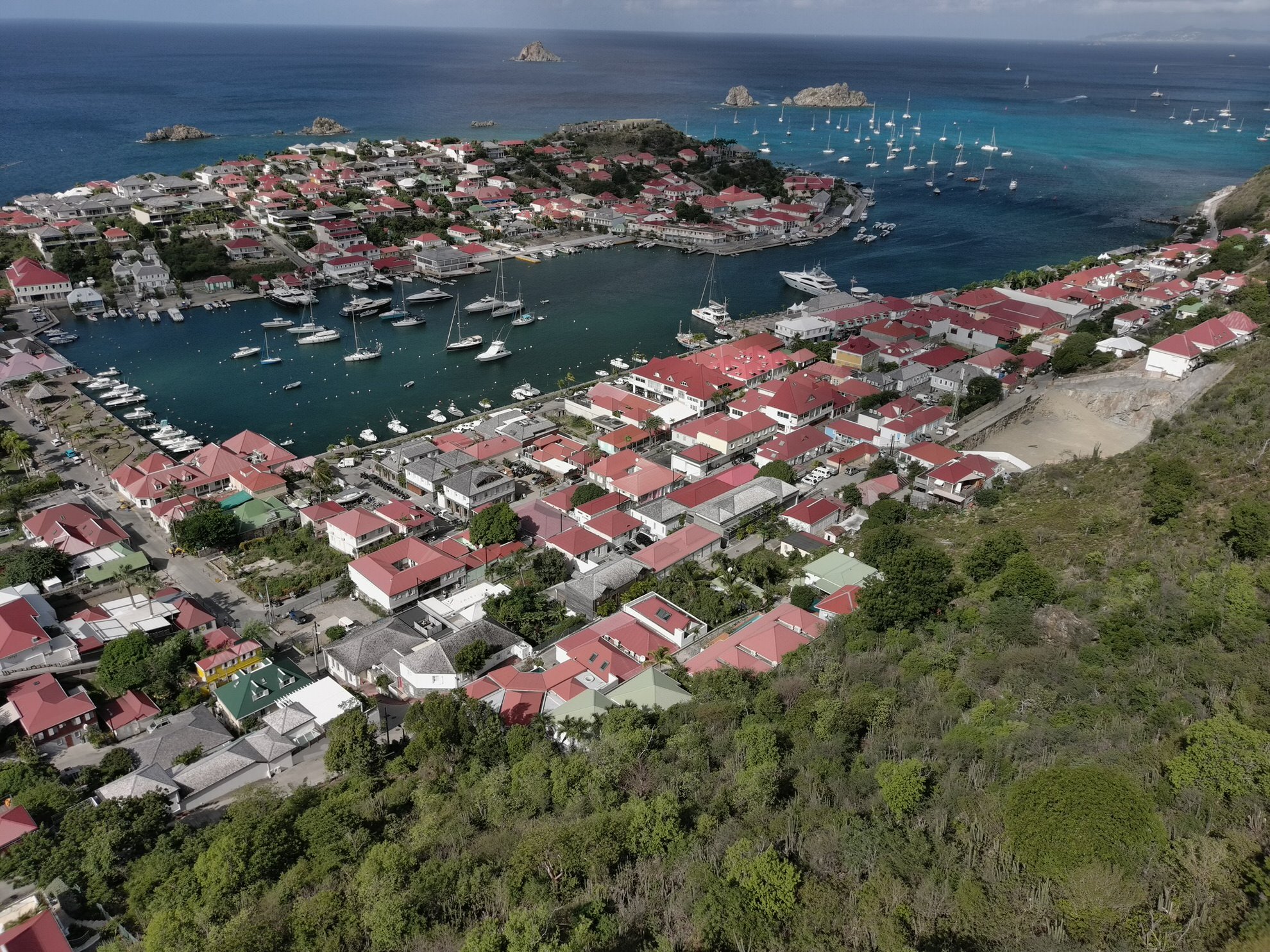 Head to the north of the island to discover the largest beach in St Barths, right next to the village of Les Flamands. A charming and picturesque rural village, it attracts tourists as well as beach lovers and lovers of authenticity, and the LVMH group has built a 5-star luxury hotel here for good reason.

Indeed, near the Cheval Blanc hotel, superb properties have been built along the beach, each having direct access to the sea!

About two kilometres from Les Flamands is the small artisanal fishing port of Corossol. If you are seeking authenticity, you’ll find it in this small village where handicrafts have pride of place and fishermen's wives still make hats and baskets out of latanier leaves.

Corossol is home to the International Shell Museum with almost 9,000 specimens on display, and the small, colourful houses around a small beach are pretty as a picture, making them a must-see at sunset. 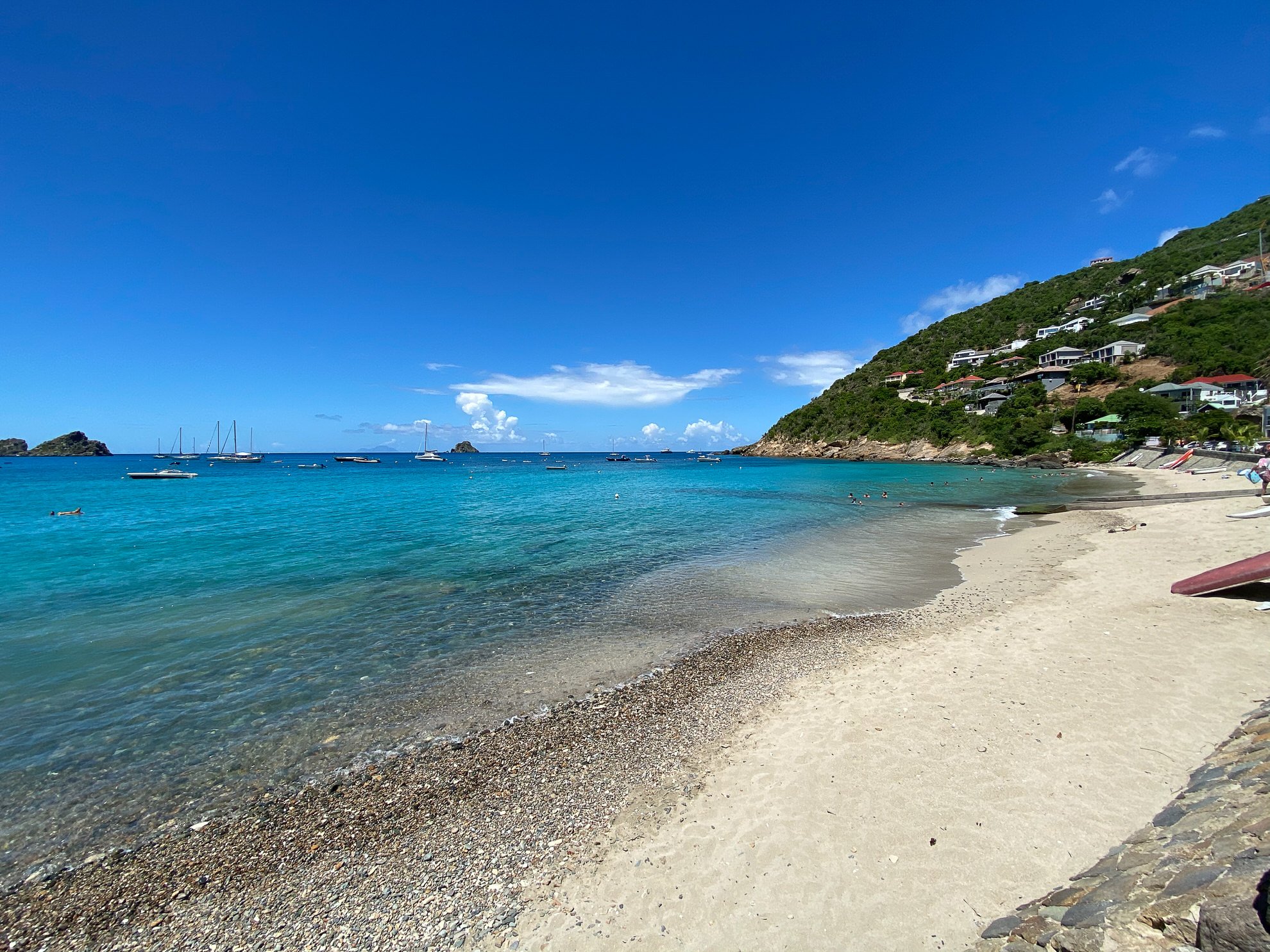 At 286 metres above sea level, the Morne de Vitet in the east of the island is its highest point. This district is less developed than other municipality because it is somewhat out of the way. It is, however, a particularly peaceful place to live. A few building plots are still available, while existing properties offer beautiful views over the bays of Cul de Sac and Tortue Island.

Also on the eastern side of St Barths, Grand Cul de Sac is famous for its fine sandy beaches bathed in shallow water, the ideal spot for windsurfers and kite surfers. The beach-front hotels, such as the Sereno and the Barthélemy, are always busy, while the Ti Corail snack bar and Rivage restaurant delight the palates of gourmets and gourmands.

The centre of the island's tourist life, St. Jean has a host of shops in the heart of the central district, a highly sought after area thanks to its dynamism and its location. The town, which is close to the airport, has an iconic beach, a favourite playground for windsurfers, while its perfectly preserved marine flora and fauna are a delight for snorkelling enthusiasts.

In addition to the famous Eden Rock Hotel, the residents of Saint-Jean have a choice of quality restaurants: Nikki Beach, Gypsea or Nao Beach, to name but a few. Located near the capital of Saint-Barth and Saint-Jean, the village of Lorient is in the midst of a development boom, with the presence of supermarkets and stores an attraction. The beach is an essential spot for board sports enthusiasts, and there is even a surf club.

If you had to draw up a list of the most beautiful beaches in St Barths, Gouverneur beach would be at the top of the list with its beautiful postcard setting and pristine white sand that matches the turquoise waters. In addition to its beauty, this place is known for its legend linked to the pirate Monbars, who is said to have buried his treasure in the area.

The Toiny district is somewhat off the beaten track but offers its visitors magnificent panoramic views. Located in the south-east of the island, the Anse de Toiny is a wild and beautiful coastline with a strong sea current, making the area unsuitable for swimming. It is nevertheless a favourite spot for surfers who enjoy some memorable sessions.

Amongst the accommodation options on site, honourable mention must go to the Toiny hotel and restaurant and the Villa Nureyev, which is named after its first owner, the star dancer Rudolf Nureyev, who never tired of gazing at the sea from its magnificent terrace.

Grand Fond is the furthest away from Gustavia and therefore from St Barths airport. This cove, exposed to the trade winds, remains mysterious because of its many rocky peaks and cays that emerge from the water, but is nevertheless ideal for relaxing walks on the pebble beach, lulled by the sound of the surf and caressed by the wind.

Also buffeted by the trade winds, Anse des Cayes owes its name to the presence of numerous corals, while the rollers of this beautiful wild beach make this spot ideal for surfers. The area is quite densely built with houses of local inhabitants.

This short overview of St Barth districts is a first draft of the different areas of the island. Please don’t hesitate to contact our team of experts to get tailor-made advice in terms of accommodation, leisure or investment.